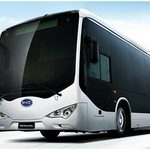 Chinese electric vehicle manufacturer BYD announced in October 2016 that they are building a bus factory in Hungary, in the northern town of Komárom, which will be the first of its kind on the European continent. BYD is one of China’s largest businesses (source: www.chinadaily.com.cn).

The plant is expected to have capacity to turn out almost 1,000 buses a year, which will be utilised depending on demand. The buses made in Komárom will be sold in Hungary and other European countries (source: www.dailynewshungary.com).

Through steady work by DEWA Zrt , Reglo’s partner and distributor in Hungary, Wall-Man manlifts became a factor in this major project.

Reglo is proud to be a part of this major project, delivering Wall-Man manlifts destined to BYD’s spray booths, and support to a perfect finishing of the buses